I don’t usually do a ton of photography with my phone, for obvious reasons.  Every now and then, though, you come up with some shots that look nice.

I recently set the camera on my Moto X to take HDR images by default.  I hadn’t really noticed much in the “enhancement” area up until yesterday, when Kim and I took a walk through the Pheasant Branch Conservancy around dusk.  It must have just been the right time and place for making the most of that feature…

Last Tuesday, the 29th of April, I spent the day visiting the campus at Hamline University in St. Paul, and the surrounding neighborhood.  I think I got a decent feel for the area, as I drove several dozen laps around the streets, and poked my head into some of the buildings on campus.  On Wednesday, I had a chance to stop by the Creative Writing Program house, and met with my advisor there.  Take a look…

I pulled the shots off my camera from a little walk around the east side of Milwaukee that I took a couple Saturdays ago.  The sun was bright and began setting while I was outside the Art Museum.  Some of these turned out pretty well…

I parked near Wells & Milwaukee, then walked toward the lake, with stops in Cathedral Square and at the War Memorial.  Here in the upper Midwest, I feel like spring can be a funny time to shoot photos outdoors — the trees are still bare, the streets can be wet, sloppy, and/or still peppered with snowbanks… it’s just not very pretty.  A beautiful sun-soaked day makes quite a difference.

Since I primarily use a Linux operating system on my computer(s), finding alternatives to popular Windows or Mac software can occasionally be difficult.  For cataloging, organizing, and editing photos, the common Windows players are Adobe products — Lightroom and Photoshop.  In Ubuntu, I used Shotwell for a quite a while, then about 2+ years ago, switched over to DigiKam.

When I recently built a new desktop machine and started running Fedora as my OS, the version of DigiKam in the repos was 3.5 (I had been running version 4).  The switch prompted me to look at Shotwell (the default photo manager for Gnome 3) again.  Like I said, it’s been a couple years, so even though the Fedora 20 repos aren’t up to the latest version of Shotwell, version 0.15.1 constitutes an upgrade from what I was last using.

I started with a (mostly) clean /home directory when I installed Fedora, so I needed to rebuild my Shotwell database completely. I was impressed that this version correctly pulled in all the meta tags and organized my photos into “Events” by date, making them a bit easier to sift through and work with. In the past, the software had trouble with certain cameras or images (particularly those that I had scanned). I haven’t looked through all 23 thousand pictures, but a glance through the last couple years appears to have sorted everything correctly. I also don’t have a folder labeled “Dec 31 1970,” which appeared to the be default applied to those images that made Shotwell throw its hands up in the past.

I haven’t tested all the plugins for web services yet, but it at least offers options for all the popular ones. I want to test out the Flickr plugin for sure, since all accounts come with a terabyte of storage — that means Flickr could be my web-based backup for all my pictures…

It’s probably at least partially a byproduct of the hardware upgrades that I’ve done with this machine (16 gigs of RAM, all SATA-3 SSD drives), but I found that the “helper” apps for editing images loaded up much more quickly than I remember. That gives Shotwell the benefit of being the place you “live” with your photos, while the other programs (like GIMP, RawTherapee, DarkTable) almost function as extensions.

Looks like I’m sold on Shotwell again for the time being.

Imagine that it’s possible to upload any skill you desire directly into your brain (ala The Matrix). If you need to know calculus, you can upload calculus. If you want to know how to snowboard, you upload snowboarding. Skills must be purchased, and more complicated skills cost more (learning to fly a plane costs more than learning to drive a car, for example). Even creative skills (like playing the piano, or painting) can be uploaded.

Particularly as it relates to creative skills, having the skill inserted does NOT automatically imbue you with talent. Assess the effect that such technology would have on contemporary art. Would this technology make art more meaningful, or less? Neither?

I sort of forgot two things related to Flickr:

The one complaint that I have (and apparently I’m not the only one) is that bulk uploading of folders doesn’t seem to be possible with the Yahoo!-built uploadr tools.  There are a few third-party apps that folks have developed which purportedly have this capability, but I know from experience that using any such piece of software is going to be hit-and-miss.

I’m also running a Linux desktop at home, so that complicates things a bit more.  I tried Postr, but it can’t upload folders.  An app called folders2flickr seemed like a good solution, but it hasn’t been updated in over two years, and I couldn’t get it to work on my system.  The gThumb image viewer is another OK option; getting starting uploading is relatively simple, but drilling down through all my folders of photos seems like an epic pain in the ass.  It is the one thing I really want to avoid.

It’s possible that I’m doomed to take hours and hours completing this project, or else giving up on it completely.

Do you store a ton of your photos on Flickr?  How did the uploading go for you?  If not the Flickr, what other online photo storage options have you explored?

I had let my Etsy store listings lapse over the last couple of months, and for whatever reason, procrastinated significantly in getting that stuff back together.

Last year, I sold a print during the deer hunt, and since Saturday is opening day, I figured I should get that stuff back together.

It would probably be a good idea for me to add a lot more shots to the shop.  Still working on getting over that “what-I-like-might-not-be-what-other-people-like” thing with regard to my creative work.  Maybe I should post some potentials here on the blog and ask visitors to offer an opinion.  I suppose it can’t hurt.

I got a little excited about taking pictures of myself this week.  If I’m going to learn how to photograph people, I am probably the most willing model that I have access to for the time being.  So, last night, after I finished the Drama Jocks show, I set myself up a little studio around my desk, built a crappy diffuser out of tissue paper and cardboard, and went to work.

I wasn’t nearly as impressed with myself as I had been with the outdoor shots over the weekend.  Maybe I just don’t like the way that I look in photos, or I don’t know how to do lighting, or both, but the shots I took last night didn’t turn out that well.  I might be able to massage a couple of them into usefulness, but I was hoping to do a little better than that.  I guess I’ll just need to keep working at it.

If you were me, and you wanted to take a picture of yourself, ostensibly “at work,” (not necessarily at your job, but doing stuff) where would you do it?  Or, what would you try to photograph yourself “doing”?

As part of my quest to challenge and enhance my skills with photography, I decided I would try to take some self-portraits while I was up north last weekend.  They turned out… OK.  At best.  I found that I was much better at taking them outside than I was indoors.  Maybe it was the limitations of the “studio” inside Mom and Dad’s house; I had trouble finding a decent backdrop to use, and I really was just lighting those shots by the seat of my pants.

I haven’t registered for that online photo class that I bought just yet, but I’m going to very soon.  I really want to improve in this aspect of photography.

3/7 Follow-up: here’s one of the aforementioned self-portraits. 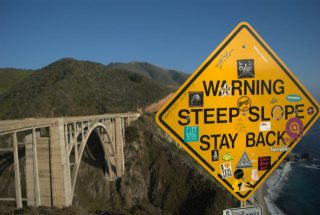 I paid my monthly bill to Etsy this morning.  It’s never really that much, as I sometimes go weeks or months with nearly no activity at all in my shop.  If I want to increase traffic over there, I probably need to add a lot more listings.

We’re often our own worst critic.  That is painfully true for me in every creative endeavor that I’ve undertaken.  I first got the impetus to open an Etsy shop when a friend at work mentioned the one that her photography instructor had.  I took a look and said, “well, I have all kinds of pictures that look better than these…”  The thing is, with art, there is no accounting for taste.  I should strive not to take and then sell the pictures that *I* necessarily like best, but put forth my best effort to look at my photos objectively, make them look their best in post-processing, and then let others judge.

What have I got to lose?  Twenty cents a listing?  Hey, if I’ve got four dollars, I’m just going to throw it in the street anyway.